The Man Who Squeezes Muscles: Searching for Purple Aki is a short documentary on BBC Three that was first shown on 12th September 2016. The documentary shows a hunt for the infamous and mysterious Akinwale Arobieke, also known as Purple Aki (BBC, 2016).

The programme opens with presenter narrating as he walks through a poorly lit underpass. This choice of opening location creates enigma and sets the tone of the programme to be an insightful investigation into the “urban legend” (Nissim, 2016). Through the mise-en-scene of graffiti, litter dirt and it all looking very urban it creates the feel of a rough environment for the viewer and sets up what they see and the tone for the rest of the documentary. 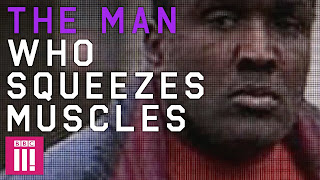 This documentary “resonates with young people” (BBC, n.d.) as said in BBC Three’s commissioning guide because it tackles a subject that “[stimulates] strong emotion and [provokes] reactions” due to Purple Aki being “somewhere between myth and reality” (Varley, 2017) for many youngsters in Liverpool. This is illustrated by the presenter saying “watch our or Purple Aki will get you” (Hattenstone & Allison, 2016)

When creating content thinking about the 5 W’s and one H helps to create a compelling and fully rounded story, especially with factual programmes (Porter, 2010). Who: Benjamin Zand presents the documentary about Purple Aki and meets some of his victims/family of victims. What: An inside look into who Akiwale Arobieke is and his encounters with young boys, touching their muscles. Where: the documentary takes place in Merseyside. When: both day and night in the present day. Why: To bring to light and explain the mystery surrounding Purple Aki. How: by talking to victims, people who have seen him and friends/family of victims, the audience is given a wider picture of who he is and what he is really like.

In conclusion, I think that this programme was successful due to the enigmas it creates from the offset and the topic it covers. I didn’t know about Purple Aki up until now and it’s interesting to see and hear about myths and legends that are created by people in local areas.