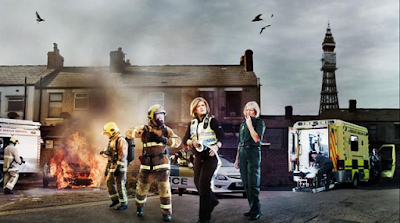 Channel 4’s remit states that they “shine a light on stories untold elsewhere” (Channel 4, n.d.) and to “stimulate debate among viewers” (Channel 4, n.d.). Through the fast pace and urgency of the actions within the programme, it fits perfectly to the channel remit.

The main focus, this week, is all about location and how the locations used within the programme contribute to the story.

The first series is based in Blackpool, Lancashire and filmed in a variety of locations, such as, “ambulances, police cars and fire engines, as well as custody suites and on the streets of Blackpool” (Channel 4, 2012). These locations don’t always look aesthetically pleasing but contribute heavily to the story of each episode.

Within episode one, a man is brought into the A&E department by the police after an overdose at a house party. There is a contrast between the two locations, one being a dark, enclosed, urban house in central Blackpool and the other being the hospital which is bright, white and very clinical. This juxtaposition of locations, in quick succession in the programme, brings character to the piece by creating an immersive experience for the audience to make them feel like they are actually there.

The programme gives the viewer more information through its locations. For example, near the end of the first episode, a criminal “urinates on the floor of his cell” (Channel 4, 2012) showing the audience the cells of the police station which many viewers would have seen before. This gives them more information and educates them on the state of police cells that people in Blackpool could end up spending the night in.

In conclusion, the locations in this series give it more character and allow the audience to become more immersed in the reality of the programme.