Series 2 of BBC Three’s This Country returned this week and we were welcomed back to the Cotswolds with open arms by cousins, Kerry and Kurtan. This Country is a mockumentary comedy series that explores “the lives of young people in modern rural Britain” (BBC Three, n.d.) and is written by “siblings Daisy May Cooper and Charlie Cooper” (BBC, 2017) who play cousins, Kerry and Kurtan. 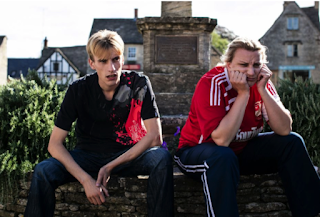 This Country is a perfect example of the programming BBC Three require through their remit and commissioning guide because the programme “[presents] the world from a distinctive but relatable point of view” (BBC, n.d.). Whilst also connecting to the “lives and aspirations of a young and young-at-heart audience” (BBC. n.d.) that BBC Three have.

Locations play a huge part in any programme, they help to tell the story and create an immersive environment for the audience; making it feel real.

“Visually the location needs to be right” (Mitchell, 2009, p.49) to ensure that story is told properly which is why This Country was “filmed in Northleach” (Merrifield, 2017) becuase the programme is set in the Cotswolds. This ensures that the programme feels real for the audience giving them the right atmosphere to make This Country become authentic.

When looking for the location and being on set the creators were “inspired by their experiences of small-town life in the West Country” (O’Grady, 2017) so they were able to bring this to the characters during shoot days. This just shows the power of choosing the right location, it not only makes it look aesthetically pleasing, it can put the actors and other creatives in the mindset and immerse them into the fictional world they are creating.

In conclusion, locations are uber important to ensure that both the mise-en-scene of the programme is right but also for the actors to immerse themselves to portray a realistic performance for the audience.

O’Grady, S. (2017, 23 October). This Country: A day on the set of the hit BBC Three series. The Independent. Retrieved from https://www.independent.co.uk/arts-entertainment/tv/this-country-waiting-for-mucklowe-bbc-daisy-cooper-charlie-cooper-kurtan-kerry-mucklowe-a8012096.html