This week we’re going to talk about story and content, because, STORY IS EVERYTHING and CONTENT IS KING (Saunders, 2018). Without these aspects, the final piece will not be a success. 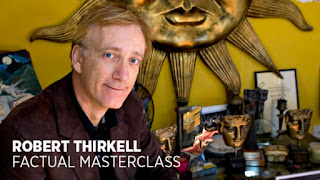 Robert Thirkell is a master of factual programming and his focus on storytelling makes his programmes innovative and compelling. His book CONFLICT is an insiders guide to factual and reality storytelling that gives trade secrets from the industry’s fountain of wisdom.

CONFLICT focuses on 8 areas of creating a factual programme using the main example of Jamie’s School Dinners. These  8 areas are Characters, Out of the box, Narrative drive, Front, Love, Interviews, Care and Timeline. Which the first letters spell out CONFLICT, I told you this guy was clever!

Thirkell talks about how combining different genres is the “key to success in modern TV” (Thirkell, 2010, p.27) and he uses a variety of examples and case studies to prove how combining genres leads to creative success. CONFLICT also explains that Thirkell’s story structures are stolen from “what has worked from the beginning of time” (Thirkell, 2010, p.30) and his favourite is the hero on a quest. By using these original stories as templates they need to be adapted to keep the story up to date by disguising them in different ‘clothes’ to fit the story and no one will know that it really is an ancient tale.

Finding the character for your story is important to make them truly heroic, as Thirkell said. And to ensure that this character is heroic a strong opposing character is required to ensure that there is conflict between them. Also, for good characters, you need to be making sure that characters are named and given something memorable, like a certain trait or characteristic, so that the audiences will remember who they are.

Narrative drive is the story arc of the film and asks the big question which we want to know the answer to by creating the film. Therefore Thirkell says we create sequences to answer smaller questions which contribute to finding out the answer to the programmes big question. He says “without a question, there is no reason to watch the scene” (Thirkell, 2010, p.99).

Thirkell gives an excellent insight into how to persuade contributors to take part in your film plus, this book just keeps on giving so it is definitely something I will be returning to on a regular basis when creating content.

My university assignment requires me to create a supporting social media campaign for BBC Three’s Amazing Humans series. Since Robert Thirkell asks “Where [is] the fairy tale?” (Thirkell, 2010, p.30) below are two fairytale stories one for each of my assignment’s sections.

Once upon a time, there was an ordinary person who had an extraordinary tale to tell. From the outside, you see a person who you would normally see walking down the street but on the inside, they have a story to tell but it takes their best friend or someone they have inspired to nominate them to share their experiences. The extraordinary human retells their amazing story with the help of their nominee by showing how they came to be this amazing human. And with their story, they inspired people across the nation to get out, do something to help others and inspire even more. The end.
(At the point of writing this blog I don’t have any confirmed contributors so the fairy tale is vague)